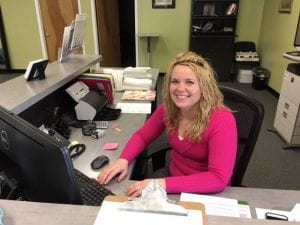 Established in 1997, STAR Physical Therapy with an office in Shelbyville, TN, had one mission, and that was to serve. That servant mindset goes beyond just the patients, but to employees and the community.

Since last November, STAR Physical Therapy has been serving the Bedford Country area. According to their website, starpt.com, “Our business model is simple — we build clinics around good people in communities that are underserved. We start by hiring good people — people with a servant’s heart. It’s our number one priority, and it makes a difference in the quality of care that STAR provides.”

Esther McConkey, PT, is one of those people that STAR had in mind. “They called me and asked if I would be interested. They pride themselves on getting local people,” said McConkey, adding, “I’m humbled and blessed to serve here in Bedford County.” 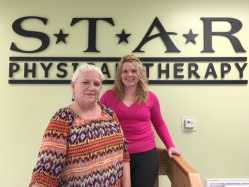 Esther McConkey, physical therapist, and Clover Honey are happy to be a part of the STAR Physical Therapy family. T-G Photo by Christina Warinner

With 35 years of experience in physical therapy, McConkey said the timing of her new journey that began last November was appropriate.

“It was good timing for me and I have been happy with the change,” she said. “STAR is very patient-oriented, and anyone who knows me knows I am too, so it was a good fit.”

Currently, she and her patient care coordinator Clover Honey are the only two in the office, however, they are planning to expand. 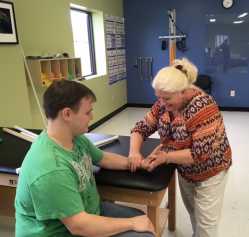 McConkey provides personalized care and builds a rapport with her patients. T-G Photo by Christina Warinner

Dedicated to employees and beyond

STAR is very “into community awareness and participation,” McConkey said. She told of her upcoming participation at the Motlow Career Day for local juniors, as well as annual events related to the American Heart Association. STAR employees volunteer their time and resources in local schools, charitable organizations, and churches in their communities.

Mission work is another avenue that STAR encourages its therapists to explore.

“They have a waiting list of volunteers. They have provided services in places such as China and Haiti,” McConkey said.

STAR Physical Therapy provides continuing education opportunities for its employees, as well. Empowering employees to grow both personally and professionally is a priority for the company, as they offer mentorships and educational programs. McConkey just recently completed training that awarded her as a Credentialed Clinical Instructor.

STAR Physical Therapy began as one office, and today there are over 65 locations throughout Tennessee. Here locally, some of the services provided include therapies to joints, carpal tunnel, rotator cuffs, sports medicine, industrial rehabilitation, and vestibular therapy. In addition, they offer a cardiac training program (non-telemetry) and a continuation program after cardiac training for patients.

The STAR Physical Therapy Shelbyville, TN office is open Monday through Friday from 8 a.m. to 5 p.m.